The Companion Abdullah ibn Mas’ud (Allah be pleased with him) relates that the Prophet ﷺ said:

Along with this hadith and other narrations related about menstruation, the scholars have deduced several conditions that help distinguish whether a woman’s vaginal bleeding can be ruled as menstruation or not.

In an effort to make this knowledge easier for women to learn, we’ve attempted to summarize some of these rulings. The following is a basic breakdown of the conditions according to the Hanafi maddhab.

Condition #1: The bleeding originates from the uterus.

Menstruation is blood that comes from the uterus.

The uterus is the medical term for the womb, which is the place where the baby grows during pregnancy. If a woman does not get pregnant after ovulation, her uterine lining will shed approximately two weeks later, and the blood which exits her body is known as menstruation.

A woman can automatically assume that her menstrual bleeding originates from the uterus. She is not obliged to double check with a doctor of where her blood is originally coming from, unless there are physical signs that may indicate otherwise, such as a vaginal infection, injury, or sickness.

Women have three exit points: the urethra, the vagina, and the anus.

Menstrual bleeding is the bleeding that exits through the vaginal hole. How it exits is of no consideration. For example, whether the blood comes out due to a natural flow or by being extracted with toilet paper, the rulings related to the blood exiting apply.

These stipulations relate to the state of the woman herself.

For more details, please refer to this article: Istihada – What Is It? With Examples.

Condition # 4: The menstrual minimum is met.

The menstrual minimum is three complete days and nights (i.e. 72 hours). Once bleeding reaches this timeframe, it is ruled as menstruation with certainty.

Furthermore, any color of vaginal discharge seen within this time takes the ruling of menses, regardless of whether it is red, brown, fresh yellow, or the like.

If the menstrual minimum is not met, then the bleeding will not be ruled as menstruation.

For more details, please refer to our self-paced course: Your Period Questions.

Condition #5: The menstrual maximum is not exceeded.

The menstrual maximum is ten complete days and nights (i.e. 240 hours). Menstruation cannot be longer than this duration according to the Sacred Law.

It is important to note that there is no condition for menstrual bleeding to be constant. Rather, the consideration is the beginning and ending times – and not what happens within the duration of 240 hours.

Furthermore, any color of vaginal discharge seen within this time takes the ruling of menses, regardless of whether it is red, brown, fresh yellow, or the like.

If the bleeding does not exceed the menstrual maximum and condition #6 is met, then the entire duration will be ruled as menstruation.

If the bleeding exceeds the menstrual maximum, then the entire duration will not be ruled as menstruation. Rather, she will need to resort to her menstruation and purity habits for a solution.

For more details, please refer to our self-paced course: Your Period Questions.

Condition #6: The minimal duration of purity follows the menstruation.

Many women overlook this very important condition! Two menstruations cannot immediately follow each other. There must be a duration without bleeding that follows it.

If the second bleeding occurs before this time frame, then it may not be ruled as menstruation. For example, a woman sees 5 days of blood, then 10 days of purity, and then 8 days of blood. The ten days of purity is not long enough to separate between the two bloods. Consequently, the second blood may not be ruled as menstruation. 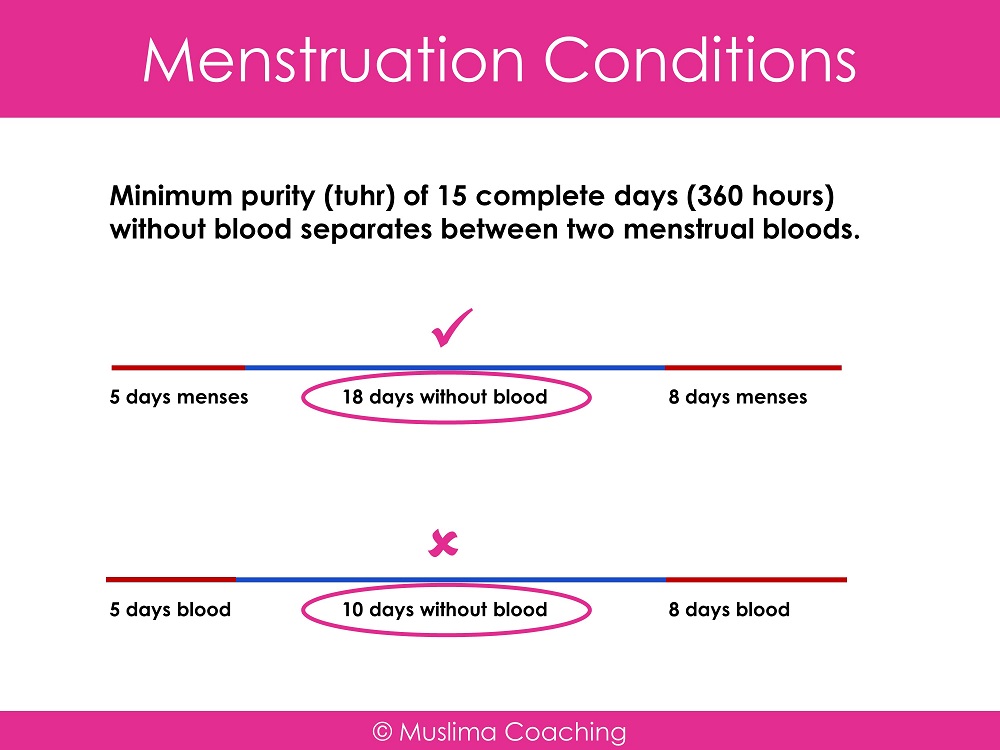 Do You Have A Menstruation Problem?

If your bleeding does not abide by the following conditions, then you have a menstruation problem and should contact a teacher of how to resolve your issue.

You can contact us at [email protected] about your period problems.

Please also consider taking our courses on menstruation too.

This answer was collected from Muslimacoaching.com, which was founded by Ustadha Naielah Ackbarali. She studied Islamic studies (Hanafi Fiqh) in Syria for about 6 years with various scholars, including Sheikh Hassan al-Hindy, Sheikh Adnan Darwish, Sheikh AbdurRahman Arjan, and Sheikh Abdullah Rahal. She also studied Hanafi Fiqh in Jordan with Sheikh Faraz Rabbani, and aqeedah with Sheikh Hamza Karamali.

Number of Q&A on IslamQA.org