Ethanol Alcohol in Food and Drinks

What is the percentage of ethanol that is permissible in a food or drink product for consumption?  What is the verdict on vanilla extract and almond extract, or any other extract, since the product itself contains a high level of alcohol, but when someone is using only a spoon full for baking, will the baked item be considered ḥarām?

Our investigations have revealed that almost 70% of products found in a typical grocery store contain some quantity of ethanol. Any product that has “natural and/or artificial flavour” ingredient listed will contain some amount of ethanol. If we were to follow the 0% rule than we can pretty much declare almost everything ḥarām. It is almost impossible to figure out the source of the alcohol from which the ethanol was derived, i.e. grape, wheat, corn, dates, etc. Even the manufacturers themselves who purchase ethanol in bulk do not know. Although, in Canada most of the food grade ethanol is from wheat, but other sources are also possible but difficult to investigate. It is almost impossible to figure out the precise amount of left over ethanol in the end product, even the manufactures are not able to tell, unless someone was to do lab testing of the products, there is no way to know the percentage of ethanol left over. This becomes an issue if someone was to say that 0.5% of ethanol is acceptable in a product, how would we know which products fall under and over this criteria?

In the Name of God Most Merciful, Most Kind

Jazak Allah Khayr/ Thank you for your question.

In reference to your query, it should be understood that islamic jurists have divided alcohol into two categories, khamr alcohol and non-khamr alcohol. Khamr alcohol has been classified as that alcohol which is derived from dates and grapes whereas non-khamr alcohol is that alcohol which is derived from anything else, whether it is honey, barley, wheat, or petroleum. The ruling with regards to khamr alcohol is that even one drop of it is considered ḥarām (prohibited) and impure. As for non- khamr alcohol, there are two opinions within the Ḥanafī school of thought. Imam Muḥammad (may God have mercy on him) is of the opinion that it carries the same ruling as Khamr Alcohol. However, Imam Abū Hanīfah and Imam Abū Yūsuf (may God have mercy upon them) are of the opinion that it is permissible to consume non-Khamr alcohol in a non-intoxicating amount.

As mentioned in your query, due to the fact that the majority of products sold at grocery stores contain some amount of alcohol and it being very difficult to abstain from using such products, many scholars have issued the fatwa (Islamic legal ruling) based on the opinion of Imam Abū Ḥanifa and Imam Abū Yūsuf (may God have mercy on them) with the following conditions;

After consulting many experts in the food manufacturing industry, we have reached the conclusion that due to high costs, alcohols used as an ingredient in food products are not sourced from dates or grapes, therefore the base assumption will be that alcohol in food products is non- Khamr. However, if one’s research proves that the alcohol in a certain product is sourced from dates or grapes, then it would not be permissible to consume it.

Based on the above, there is no doubt that those products which do not have alcohol listed as an active ingredient will be permissible to consume, as the amount of alcohol in those products is so minimal, that even if one was to consume the product to one’s fill, one would not get intoxicated.

As for those products which have alcohol listed as an active ingredient, such as vanilla essence, if it is used in a minimal, non-intoxicating amount, as vanilla essence is normally used, it cannot be considered ḥarām (prohibited), especially when the purpose of using such products is not the alcohol. Yes, if used in an excessive amount, where one fears it may lead to intoxication, it would not be permissible.

Also, it should be remembered, that as the verdict being issued on the opinion of Imam Abū Ḥanifa and Imam Abū Yūsuf (may God have mercy on them) is based on necessity and public predicament, it would be better to abstain from using such products when an alternative is easily available, especially in the case where alcohol is listed as an active ingredient.

It is also important to note, that based on the conditions mentioned above, it would not be permissible to consume a product where alcohol is the main purpose or which is consumed in the manner that intoxicants are consumed, such as alcoholic drinks etc. 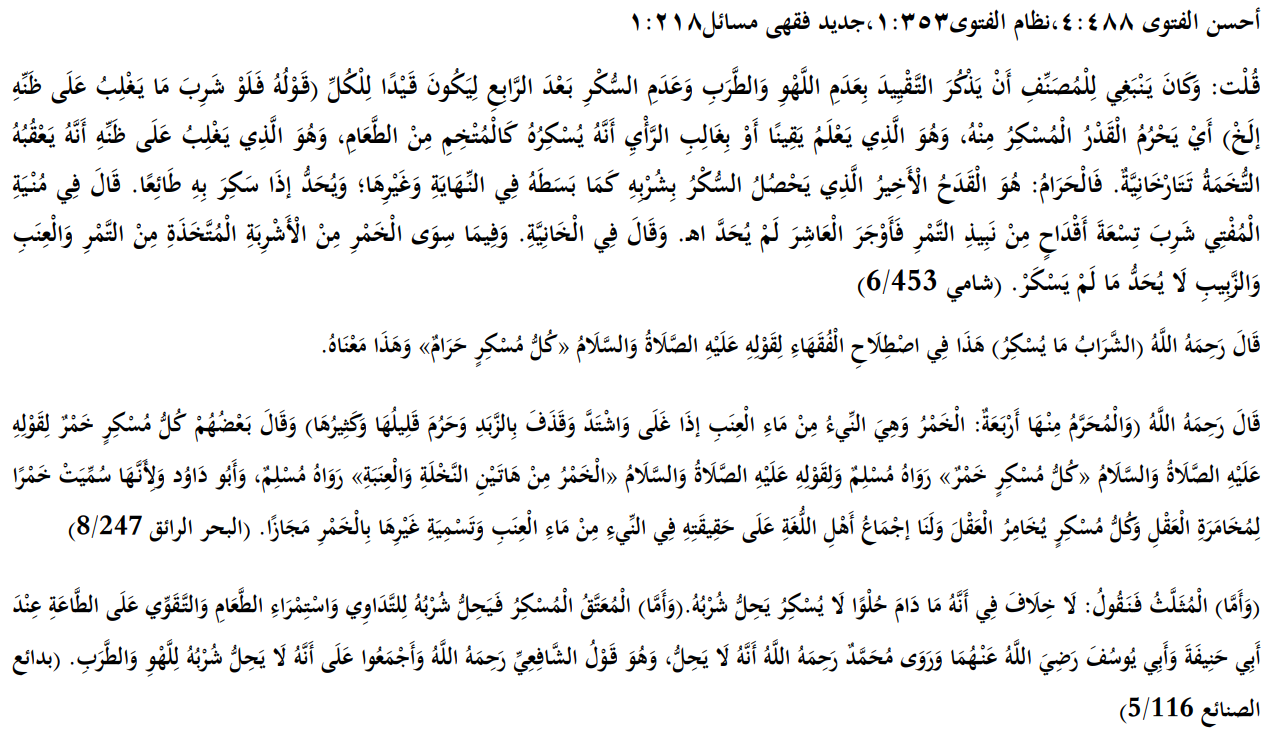 This answer was collected from Mathabah.org. It’s an Islamic educational institute based in Canada. The questions are generally answered by Sheikh Yusuf Badat and Sheikh Omar Subedar.

1) Is it allowed for men/women to cut/trim their eyebrows? 2) Whether or not maternal aunt (wife of mother’s brother) of my wife my mehram?

There is an old mosque built in 1914 almost a century ago. We want to rebuild the mosque with various modern facilities. One being much needed parking. Can we build a basement or a stilt parking? Is it allowed to have a parking underneath the mosque? Please let me know. I also tried searching for related/matching questions but couldn’t get any.

Is it allowed for Muslims to attend a wedding ceremony of Christians in a Church?

A New Form of Salah Hajat?

What is the meaning of the name Zeeshan? Is this an acceptable Islamic name for a boy?

This website uses cookies to improve your experience while you navigate through the website. Out of these, the cookies that are categorized as necessary are stored on your browser as they are essential for the working of basic functionalities of the website. We also use third-party cookies that help us analyze and understand how you use this website. These cookies will be stored in your browser only with your consent. You also have the option to opt-out of these cookies. But opting out of some of these cookies may affect your browsing experience.
Necessary Always Enabled
Necessary cookies are absolutely essential for the website to function properly. These cookies ensure basic functionalities and security features of the website, anonymously.
Functional
Functional cookies help to perform certain functionalities like sharing the content of the website on social media platforms, collect feedbacks, and other third-party features.
Performance
Performance cookies are used to understand and analyze the key performance indexes of the website which helps in delivering a better user experience for the visitors.
Analytics
Analytical cookies are used to understand how visitors interact with the website. These cookies help provide information on metrics the number of visitors, bounce rate, traffic source, etc.
Advertisement
Advertisement cookies are used to provide visitors with relevant ads and marketing campaigns. These cookies track visitors across websites and collect information to provide customized ads.
Others
Other uncategorized cookies are those that are being analyzed and have not been classified into a category as yet.
SAVE & ACCEPT